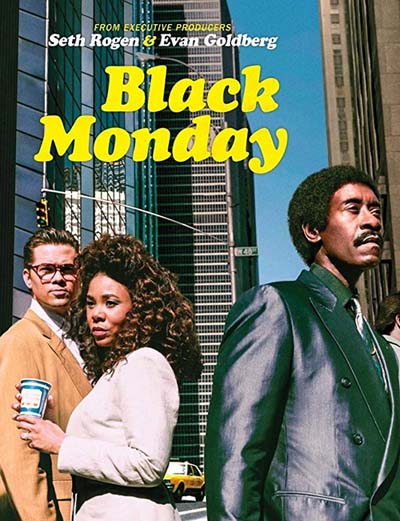 SHOWTIME’S latest comedy series ‘Black Monday’ takes us on a trip down memory lane to one of the worlds worst financial meltdowns to hit Wall Street, the stock market crash of 1987. The day it all went tumbling down in the United States, and became known as ‘Black Monday’. The new series created by Jordan Cahan and David Caspe, combines a great cast starring, Don Cheadle, Regina Hall, Andrew Rannels, Paul Scheer, Casey Wilson, Yassir Lester and Horatio Sanz in this well scripted hilarious production to showcase a tragic economic event .

The show which officially premiered on 20 January 2019, tracks Don Cheadle (Mo Monroe) an investment trading firm owner of the Jammer Group, trying to be the biggest player on Wall Street, in the build up to the stock market crash. After watching the pilot, I can honestly say I was hooked, so before I give too much away check out the trailer below…

Travel back to October 19, 1987—aka Black Monday, the worst stock market crash in the history of Wall Street. To this day, no one knows who caused it … until now. This is the story of how a group of outsiders took on the blue-blood, old-boys club of Wall Street and ended up crashing the world’s largest financial system, a Lamborghini limousine and the glass ceiling. The outrageous comedy series stars Don Cheadle, Andrew Rannells and Regina Hall.